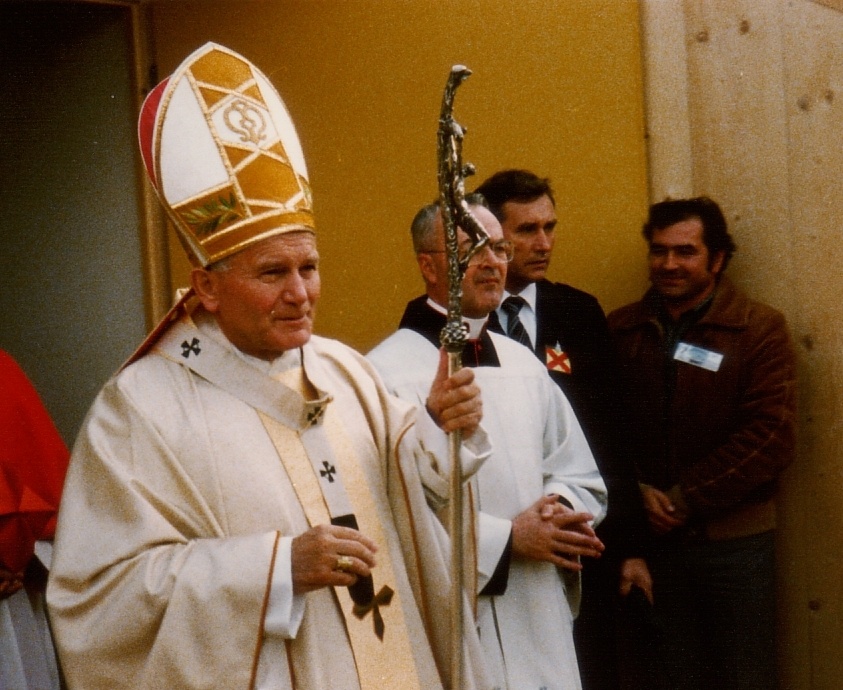 Uncategorized
by Society Of The Holy Rosary

Homily for the Canonization of St. Maximilian Kolbe

The Homily for the Canonization of St. Maximilian Kolbe was given by Pope Saint John Paul II on October 10, 1982.

150,000 people were in attendance at St. Peter’s Square for the three-hour rite, including Franciszek Gajowniczek, a former the former Auschwitz prisoner that Saint Maximilian gave his life to save.

The Homily for the Canonization of St. Maximilian Kolbe

From today on, the Church desires to address as “Saint” a man who was granted the grace of carrying out these words of the Redeemer in an absolutely literal manner.

For towards the end of July, 1941, when the camp commander ordered the prisoners destined to die of starvation to fall in line, this man-Maximilian Maria Kolbe-spontaneously came forward and declared himself ready to go to death in the place of one of them. This readiness was accepted and, after more than two weeks of torment caused by starvation, Father Maximilian’s life was ended with a lethal injection on August 14, 1941.

All this happened in the concentration camp at Auschwitz where during the last war some four million people were put to death, including the Servant of God, Edith Stein (the Carmelite Sister Teresa Benedicta of the Cross), whose cause for beatification is in progress at the competent Congregation. Disobedience to God-the Creator of life who said, “Thou shalt not kill”-caused in that place the immense holocaust of so many innocent persons. And so at the same time, our age has thus been horribly stigmatized by the slaughter of the innocent.

Father Maximilian Kolbe, himself a prisoner of the concentration camp, defended in that place of death an innocent man’s right to life. Father Kolbe defended his right to life, declaring that he was ready to go to death in the man’s place, because he was the father of a family and his life was necessary for his dear ones. Father Maximilian Maria Kolbe thus reaffirmed the Creator’s exclusive right over innocent human life. He bore witness to Christ and to love. For the Apostle John writes: “By this we know love, that he laid down his life for us. And we ought to lay down our lives for the brethren” (1 John 3:16).

The Church has venerated Father Maximilian as “Blessed” since 1971. By laying down his life for a brother, he made himself like Christ.

Gathered today before the Basilica of St. Peter in Rome, we wish to express the special value which Father Maximilian Kolbe’s death by martyrdom has in the eyes of God.

“Precious in the sight of the Lord is the death of his saints.” These are the words we have repeated in today’s responsorial psalm. It is truly precious and inestimable! Through the death which Christ underwent on the Cross, the redemption of the world was achieved, for this death has the value of supreme love. Through the death of Father Maximilian Kolbe, a shining sign of this love was renewed in our century which is do seriously and in so many ways threatened by sin and death.

In this canonization liturgy there seems to appear before us that “martyr of love” of Oswiecim (as Paul VI called him), saying: “O Lord, I am thy servant. I am thy servant, the son of thy handmaid. Thou has loosed my bonds” (Psalm 115 (116):16).

And as though gathering together in one sacrifice the whole of his life, he-a priest and a spiritual son of saint Francis-seems to say: “What shall I render to the Lord for his bounty to me? I will lift up the cup of salvation and call on the name of the Lord” (Psalms 115 (116):12).

These are words of gratitude. Death undergone out of love-in the place of one’s brother-is an heroic act of man. It is an act through which, together with the one already beatified, we glorify God. For from God comes the grace of such heroism, of this martyrdom.

Therefore let us today glorify God’s great work in man. Before all of us gathered here, Father Maximilian Kolbe lifts up his “cup of salvation.” In it is contained the sacrifice of his whole life, sealed with the martyr’s death “for a brother.”

Maximilian prepared for this definitive sacrifice by following Christ from the first years of his life in Poland. From these years comes the mysterious vision of two crowns-one white and one red. From these our saint does not choose. He accepts them both. From the years of his youth, in fact, Maximilian was filled with the great love of Christ and the desire for martyrdom.

The inspiration of his whole life was the Immaculata. To her he entrusted his love for Christ and his desire for martyrdom. In the mystery of the Immaculate Conception there revealed itself before the eyes of his soul that marvelous and supernatural world of God’s grace offered to man.

The faith and works of the whole life of Father Maximilian show that he thought of his cooperation with divine grace as a warfare under the banner of the Immaculate Conception. This Marian characteristic is particularly expressive in the life and holiness of Father Kolbe. His whole apostolate, both in his homeland and on the missions, was similarly marked with this sign. In Poland and in Japan the centers of this apostolate were the special cities of the Immaculata-Niepokalanow in Poland and Mugenzai no Sono in Japan.

God Found Him Worthy of Himself

What happened in the starvation bunker in the concentration camp at Oswiecim (Auschwitz) on August 14, 1941?

The reply is given in today’s liturgy. “God tested” Maximilian Maria “and found him worthy of himself” (Wisdom 3:5). God tested him “like gold in the furnace and like a sacrificial burnt offering he accepted him” (Wisdom 3:6).Even if “in the sight of men he was punished,” yet “his hope is full of immortality.” For “the souls of the righteous are in the hands of God and no torment will ever touch them.” And when-humanly speaking-torment and death came to them, when “in the eyes of men they seemed to have died…”, when “their departure from us was thought to be an affliction…”, “they are in peace.” They experience life and glory “in the hands of God” (Wisdom 3:1-4).

This life is the fruit of death like Christ’s death. Glory is the sharing of his resurrection. So what happened in the starvation bunker, on August 14, 1941?

There were fulfilled the words spoken by Christ to the Apostles that they “should go and bear fruit and that their fruit should abide” (John 15:16).

In a marvelous way the fruit of the tragic death of Maximilian Kolbe endures in the Church and the world!

In Their Minds It Was Not “Death”

Men saw what happened in the camp at Auschwitz. And even if to their eyes it must have seemed that a companion of their torment “dies,” even if humanly speaking they could consider “his departure” as “a disaster,” nevertheless in their minds this was not simply “death.” Maximilian did not die but “gave his life…for his brother.” In that death, terrible from the human point of view, there was the whole definitive greatness of the human act and of the human choice. He spontaneously offered himself up to death out of love.

And in this human death of his there was the clear witness borne to Christ: the witness borne in Christ to the dignity of man, to the sanctity of his life, and to the saving power of death in which the power of love is made manifest.

Precisely for this reason the death of Maximilian Kolbe became a sign of victory. This was victory won over all systematic contempt and hate for man and for what is divine in man-a victory like that won by our Lord Jesus Christ on Calvary.

“You are my friends if you do what I command you” (John 15:14). The Church accepts this sign of victory-won through the power of Christ’s redemption-with reverence and gratitude. She seeks to discern its eloquence with all humility and love.

As ever when the Church proclaims the holiness of her sons and daughters, as also in the present case, she seeks to act with all due exactness and responsibility, searching into all the aspects of the life and death of the Servant of God.

Yet at the same time the Church must be careful, as she reads the sign of holiness given by God in his earthly Servant, not to allow its full eloquence and definitive meaning to go unnoticed. And so, in judging the cause of Blessed Maximilian Kolbe even after his Beatification, it was necessary to take into consideration many voices of the People of God-especially of our Brothers in the episcopate of both Poland and Germany-who asked that Maximilian Kolbe be proclaimed as a martyr saint.

Before the eloquence of the life and death of blessed Maximilian, it is impossible no to recognize what seems to constitute the main and essential element of the sign given by God to the Church and the world in his death.

And so, in virtue of my apostolic authority, I have decreed that Maximilian Maria Kolbe – who after his Beatification was venerated as a Confessor – shall henceforeward be venerated also as a Martyr!

“Precious in the eyes of the Lord is the death of his faithful ones!” Amen.